Home › Technology Management › How to Make the Fortune 100 Best Companies to Work For: Hitachi Data Systems and Hasbro Compared

How to Make the Fortune 100 Best Companies to Work For: Hitachi Data Systems and Hasbro Compared

Two relative newcomers to the Fortune® 100 Best Companies to Work For, Hitachi Data Systems (HDS) and Hasbro were ranked 63 and 92 respectively in 2013. Compiled by the Great Place to Work® Institute, the list consists of those companies whose policies, leadership, culture, and benefits represent concrete realizations of the institute’s five Dimensions of the Great Place to Work Model: credibility, respect, fairness, pride, and camaraderie. “In the best companies, leaders at all levels have a strong commitment to creating strong ties between the employee and the organization. Indeed, enhancing trust, pride, and camaraderie in the workplace is the central task of effective leadership in today’s organization” (Burchell & Robin, 2011, p. 7). 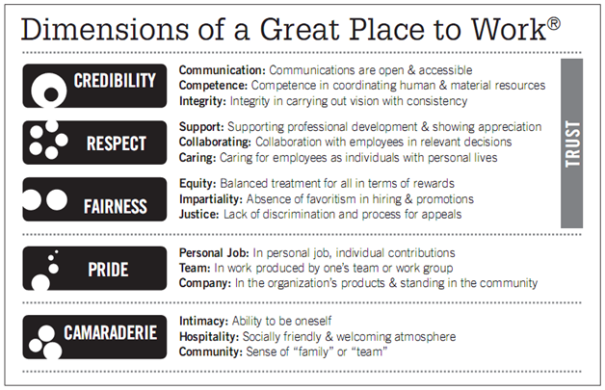 The Great Place to Work Institute claims that companies realizing its definition of a trusting relationship between leadership and employees earned twice the market returns of workplaces that did not meet it’s criteria. In addition, the workplaces identified by the institute have lower voluntary separations, greater pools of talent from which to recruit, and higher attendance rates than companies with low model affinity (Burchell & Robin, 2011, p. 13). Whereas, Hasbro and HDS were ranked in close proximity meeting the criteria set forth by the Great Place to Work Institute, their programs contain similar initiatives and programs and some that are different. After a brief profile of each firm, these differences in implementation and approach will be discussed as a function of the nature of their respective businesses. The organizational behavior concepts guiding the leadership teams in the creation of each company’s human resource policies and benefits programs are different reflecting the very different workforces engaged by each firm.

Win or Lose, It’s How Hasbro Plays the Game that Matters

In 1923, two brothers, Henry and Helal Hessenfeld formed a business to distribute fabric remnants. After branching into toy production in the 1940s, their expansion into the market continued and in 1968 became publicly traded as Hasbro Industries. Disputes within leadership of the toy and pencil divisions in the 1970s ended with the company being split along those organizational lines. Shortly afterward, a retrenchment strategy focused Hasbro on developing toys for specific markets and continue to contract its production to vendor-run facilities. Later expansions in the 1990s and 2000s consisted of many brand acquisitions (Hoover’s, 2012, p. 3). With new leadership and a new corporate plan, Hasbro markets itself as a branded play company since, along with toys and games, the company expanded into television programming, motion pictures, digital entertainment leveraging its brand porfolio for licensing opportunities (Hasbro, Investor Relations, 2012). The Hasbro core values inform the actions and decisions of the company and the individuals therein. These values are community, innovation, fun, diversity, competitiveness, entrepreneurial spirit, and integrity (Hasbro, Our Culture, 2012).

Employed at facilities in 27 countries, approximately 6000 Hasbro employees enjoy the fruits of creative benefit policies at the Pawtucket, Rhode Island headquartered company. However, with half of Hasbro’s employees self-identifying as female (100 best companies to work for, 2012), the firm recognizes the value of work-life balance with on-site childcare as well as adoption and foster-care assistance, half-day Fridays all year long, discounted toys and games, an Employee Assistance Program, flexible spending accounts, and an onsite fitness center (http://www.hasbro.com/corporate/careers/making-you-smile.cfm). For the 14 percent of Hasbro employees self-identifying as belonging to a minority classification, discrimination policies cover race, religion, and sexual orientation. Dedication to diversity of individuals is not only present in policies such as this, but benefits can be extended to domestic partners of same-sex couples.

The appreciation and value to employees seems reflected in the Fortune 100 article with Hasbro seeing voluntary separation rates of 3% during 2012 and 5.4% during 2013 in durable goods manufacturing which averaged 8.8 percent (see Figure 2). The job market from which the company draws talent is wide with Hasbro applicants in 2011 numbered at 30,000 for only 85 new jobs created in that period.

Hitachi Data Systems operates as a subsidiary of Hitachi, Ltd. offering enterprise level data storage hardware and software technologies to corporations with large electronic information demands. The company was founded as a joint venture of Hitachi, Ltd. and Electronic Data Systems after their acquisition of National Advanced Systems, an IBM mainframe marketing, sales, and service company (Fisher, 1989). A subsequent buy-out of EDS allowed Hitachi to remake NAS into an enterprise storage solution provider and rename the organization Hitachi Data Systems. From its parent, Hitachi inherited the Hitachi Spirit values represented by their Japanese terms. Wa represents harmony, trust, and respect. Makoto is sincerity, fairness, honesty, and integrity. Kaitakusha-Seishin translates as pioneering spirit and challenge (Hitachi Data Systems, 2012). These are the corporate values that Hitachi, Ltd. expects its subsidiaries to use in guiding in operations.

Employing 5400 people in the U.S. and 100 other countries, Hitachi Data Systems vies for talent in the very competitive technology labor markets. According to the Fortune 100 article, HDS experienced a 4 percent voluntary turnover rate in 2011, almost one-third the information industry average (see Figure 2) , with 12,460 applicants for its 132 new jobs. Pay and benefits are market competitive and the firm offers onsite fitness centers as well as subsidized gym memberships (100 best companies to work for, 2012). Employee benefits can be extended to domestic partners of same-sex couples and discrimination policies include sexual orientation (100 best companies to work for, 2012).

These companies’ standard battery of benefits as well as pay for both hourly and salaried workers are commensurate with the various labor markets in which they compete for talent (Hitachi Data Systems, 2012; Hasbro, Making you smile: benefits at Hasbro, 2012). Examining the innovative policies and practices of Hasbro and HDS that are not part of a standard benefit package in light of organizational behavior concepts explains how these firms’ practices influence their workforces and mold organizational behavior within the firms to increase the profitability of their companies.

Hasbro and the Job Characteristics Model

Using the Job Characteristics Model described in Robbins and Judge (2011, p. 242), Hasbro job design can be assessed and evaluated to determine its motivating potential score (MPS), a predictive index of motivating potential (Robbins & Judge, 2011, p. 244). Measures taken by Hasbro can also be used to modify these scores higher or lower depending on the dimension the practice influences. For a particular job in manufacturing, industries develop highly specialized positions with low skill variety as a function high repetition and little apparent task identity as only portions of the end product are viewed. There exists some concrete task significance since the next worker in the facility will be stationed in close proximity. Autonomy for these tasks is very low since all activities are prescribed by the task at hand and the standardized procedures the firm expects to be used. Feedback at these tasks is very low since the success or failure of the product will not translate into “direct and clear information about job performance” (Robbins & Judge, 2011, p. 243).

Hasbro implements several cross-cutting actions that would modify the scores in some of the areas in which typical manufacturing jobs do not contribute to a high MPS especially those that contribute to experiencing meaningfulness in tasks: skill variety, task identity, and task significance. Leveraging the educational tools and techniques of Hasbro University, management offers cross-functional training to broaden an employee’s production capabilities and deepen their product understanding. This strengthens the job skill variety score significantly by enabling job rotation schedules. Task identity is communicated especially during the Experiencing Hasbro, a two-day program for early career recruits sharing successes of management in delivering a Hasbro product. To encourage understanding of how their jobs affect the lives of others, Hasbro encourages open communication about developments at the corporate level and within their business concerns. In addition to listening, Hasbro acts on the relationship building suggestions of its employees. After a corporate survey “revealed that warehouse workers, such as forklift truck drivers, felt somewhat disconnected from the rest of the company because they did not have access to information systems available to office-based colleagues” (Industrial Relations Services, 2000), Hasbro installed computer workstations with internet access to communicate that their jobs were meaningful and deserved tools on par with those offered to other employees.

Innovation isn’t just a buzz word at Hasbro since its corporate strategy requires it. Employees are encouraged to come with new ways to get their tasks accomplished and to share ideas that will positively impact the company’s profitability. The feedback systems implemented at Hasbro include not only performance goals and on-the-job coaching to achieve those goals, but also a Leadership 360 offered through Hasbro University to help them use performance feedback positively for job and skill development. Autonomy and feedback scoring for Hasbro jobs would also be adjusted upwards due to these programs.

Receiving awards for workplace excellence crosses national boundaries at Hitachi Data Systems. In addition to a ranking on the Fortune 100 Best Companies to Work For, the company received recognition from The Great Place to Work Institute for offices in Poland and France (Hitachi Data Systems, 2012). Human resource departments attract and retain talent with benefits tailored to their regions and analyzed for employee engagement. In the corporate video The Culture of Hitachi Data Systems, John Mansfield, HDS Senior Vice President of Global Solutions Strategy and Development, states that “if one group is successful and another is not, the collective entity that is Hitachi Data Systems is not successful” (Hitachi Data Systems, 2011). Further comments from various executives indicate that Hitachi Data System operates a team-oriented organization. Additionally, the interviewees state that these sets of highly skilled employees are small, focused on specific objectives, cross functional boundaries, and exist with partners and clients as active participants. Also, Hitachi empowers these teams with the authority to make decisions and pursue implementations. With programs like its Global Sales Boot Camp, a Gold Award winner for Best Sales Onboarding Program in the 2011 Brandon Hall Excellence Awards (http://www.brandonhall.com/awards/excellence-in-learning/134.html), new hires are given valuable tools to succeed in their duties at Hitachi Data Systems. The team characteristics described meet many of the success factors and all of the characteristics, context, composition, and process, of the team effectiveness model discussed in Robbins and Judge (2011, pp. 318-328).

So, Just Give People Stuff and Reap the Profits? Not exactly…

However, having attractive benefits packages is not the only requirement for a company to align its human resource policies in support of long-term satisfaction, tenure, and productivity and thus be ranked highly in the list. The firms make the Best Companies to Work For list “because of their leaders’ abilities to create strong relationships.” What the firms do to engender trust between management and employees is similar in many ways. Hasbro and Hitachi Data Systems both encourage open communication policies and continuously show employees they are listening developing mutual respect in the process. Both firms promote corporate responsibility through words and a variety of sponsored activities to bring more ethical and responsible organizational decisions into practice which in turn increases leadership credibility (http://csr.hasbro.com; http:// http://www.hds.com/corporate/social-responsibility). Each have different performance evaluation processes but constantly strive for fairness presenting employees with opportunities for personal and professional growth and allowing no exceptions to its corporate values. Camaraderie, another relationship important in the Great Workplaces Institute evaluation, springs from the various philanthropic employee volunteer programs such as Hitachi’s Community Action Committees and Team Hasbro program. Developing the relationship between employees and their jobs such that each takes pride in their work is where the two firm’s diverge in philosophies. Hasbro approaches employee feedback and development with a constant but potentially irregular practice of on-the-job coaching and incremental improvement suggestions. This is reflective of the relative rigidity of any manufacturing concern and the high level of technical expertise to make great strides in production efficiencies. Hitachi concentrates on expanding the already highly educated employee base to develop firm and even industry changing technologies to market. Hasbro’s executive development and business school focus on developing management. Hitachi Data Systems educational programs focus on spreading ideas about its industry.